A Vibrating Pill for Constipation Goes to the FDA

by Alicia Nelson
in Health
0 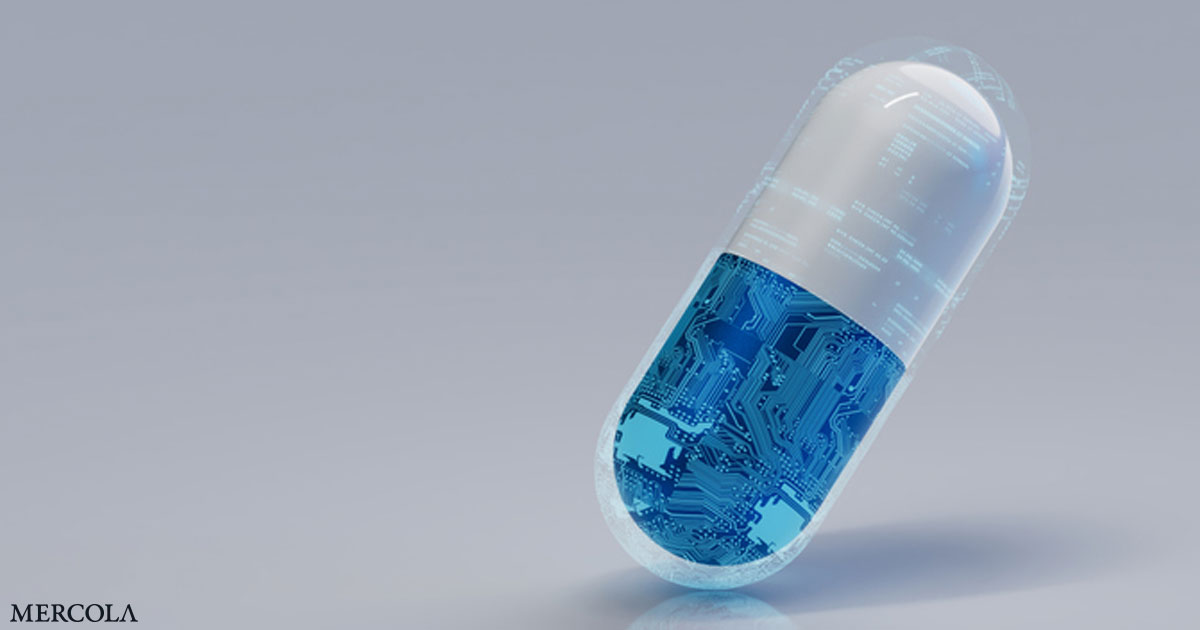 Constipation is uncomfortable, can cause bloating and produces hard, dry stool. But do you really want to solve the problem with a nonpharmaceutical, nonbiodegradable, vibrating pill?1 One Israeli manufacturer is banking that you do.

At some point, nearly everyone has experienced some degree of constipation. It is a common complaint that some estimate can result in up to 2.5 million doctor visits each year.2 There are a variety of reasons that you may experience fewer than normal bowel movements that are hard, dry and often difficult to pass.

Some of the more common include not enough liquid or fiber in your diet, a lack of exercise, certain medications, laxative abuse and a change in lifestyle habits. Researchers have found that gastrointestinal motility also follows a circadian rhythm.3 For example, normally, humans have a bowel movement during the day when gastric motility is greater and not at night when there is minimal activity in the gastrointestinal tract.

When there is circadian rhythm dysfunction, it can affect motility and is associated with digestive conditions, such as irritable bowel syndrome and constipation. The vibrating pill was created to address chronic constipation resulting from an alteration in circadian rhythms that control physiological processes, such as your gastrointestinal tract.

Let’s Shake Things Up a Bit

One of the initial studies done by Vibrant, the Israeli company that produced the vibrating pill, was tested on 26 participants who had bowel movements twice weekly. Eamonn Quigley, who joined the faculty at Houston Methodist hospital as the head of gastroenterology and hepatology in 2013, commented in USA Today4 that this was a novel device-based approach to treating constipation.

Quigley was hired by Vibrant to design the next research trial to compare the pill against a placebo. Vibrant also has a current study5 evaluating the capsule against a placebo, in which they hope to enroll 120 participants with an estimated study completion date of August 30, 2022.

Yishai Ron, gastroenterologist and research leader told USA Today7 that the pill vibrates at roughly the same rate a normal colon contracts. Before taking the multivitamin sized pill, the patient puts it in a pod to activate it.8 The pill then begins to vibrate roughly six to eight hours after the patient swallows it.9

The researchers believe that the device will help reset the gut-brain connection, and thus the circadian rhythm. The vibrations reportedly stimulate the “colon’s involuntary contractions” and help improve regular bowel movements.10 In the reported study, the device manufacturer enrolled 312 participants. Of those, 39% reported they had one additional bowel movement each week.

In the placebo group, 22% reported an additional bowel movement each week from just the suggestion that the pill they took could help alleviate their chronic constipation. Another 22% taking the vibrating pill reported two or more bowel movements each week, as compared to 11% in the control group. In the short time that the researchers followed the participants, there were no treatment-related side effects.

One More Way to Track Your Movements — So to Speak

Another reported benefit of the device is that the progress of the pill through the gastrointestinal tract can be tracked using an app on your smartphone. In a March 2021 press release, in which the company announced a $7.5 million Series E funding, they revealed that the pill can also be monitored by more than the patient.11

Information from the pill is transferred to the patient’s smartphone which can then be monitored by the physician. For practical purposes, this means that the patient will have consistent exposure to EMF on their body as the pill uses Bluetooth technology to communicate with the cell phone.

As I have written before, and discussed in my book “EMF*D,” besides your cellphone, electronics such as baby monitors, Bluetooth devices, cordless phones, smart thermostats and Wi-Fi routers consistently emit microwave radiation at levels that may damage your mitochondria.

As Martin Pall and I discuss in an interview February 10, 202212 multiple studies indicate that EMF affects your intracellular calcium by activating voltage-gated calcium channels (VGCC), located in the outer membrane of the cells. Once activated, they allow a tremendous influx of calcium, which in turn increases levels of nitric oxide and superoxide.

This triggers a chain reaction of devastating effects that can ultimately increase your risk for chronic disease, accelerated aging and cause severe cellular damage. This exposure to Bluetooth and EMF may also be linked to an invasion of your privacy.

Karl Racine, attorney general for the District of Columbia, led complaints against Google after a three-year investigation.13 Three other attorneys general from Texas, Washington and Indiana also filed lawsuits that claimed Google misled users and tracked location information without user permission. Racine said, “The truth is that contrary to Google’s representations it continues to systematically surveil customers and profit from customer data.”14

The investigation15 included a real-world example from privacy researcher Gunes Acar, whose location data was tracked to dozens of locations over several days and the data saved to his Google account. Acar had turned off the “location history” on his cell phone.

In the past, Google location data had been used in criminal cases, including a warrant issued by police in Raleigh, North Carolina, to track down devices in the area of a murder.16 At issue is the company’s continued tracking even when location history is turned off.

Aside from hiding location tracking under settings users wouldn’t expect, like “Web & App Activity” — which is turned on by default — Google is accused of collecting and storing location information via Google services, Wi-Fi data and marketing partners, again after the device or account settings had been changed to stop location tracking.17

Tracking a smart pill inside your gastrointestinal tract via an app on your cellphone is another layer of digital information that can be hacked to reveal personal information or can be combined with Google data to create a more complete picture of your movements and actions.

A literature review of 58 articles revealed that 16% of the adults surveyed had chronic constipation and 33.5% of those over age 60 were chronically constipated.18 For many people, constipation is an aggravation, but it’s also the reason for millions of clinic visits every year19 and more than 700,000 visits to the emergency room.20

In the years between 1997 and 2010, the number of people hospitalized primarily for constipation more than doubled.21 A retrospective study published in 2022, revealed in patients 65 years and older, 65% had signs and symptoms of constipation and 60% had been prescribed laxatives.22 In other words, constipation has grown to epidemic proportions.

According to the Oppenheimer Center for Neurobiology of Stress and Resilience,23 chronic constipation is diagnosed after a three-month history of at least two of the following symptoms with 25% of bowel movements:

For many, the topic of their bowel movements is a private matter. This makes understanding and learning about the actual mechanics of how stool is produced and eliminated difficult, as many don’t find it a topic they want to discuss, even with their physicians. Yet, because constipation is not a benign condition, it is essential that you pay attention to your bowel habits.

Chronic Constipation Is More Than Uncomfortable

As food makes its way through your small intestine, nutrients and water are extracted, leaving only the waste products your body cannot use. Several factors can affect the consistency and mobility of your stool, increasing your risk of developing chronic constipation. These include:

Chronic pushing and painful stools can increase your risk of large hemorrhoids.31 These can be aggravating and painful. Your colon can easily hold a few pounds of stool, but when you’re constipated, this can increase to 10 pounds of dry, hard feces. The sheer volume can irritate the lining of the colon and produce toxins before it’s eliminated.

Because the structures of the colon and female reproductive organs are close, pressure from large amounts of stool in the colon can lead to genitourinary prolapse into the vagina34 and increases the potential that the bladder will not completely empty. This can lead to reflux from the bladder into the kidneys, called vesicoureteral reflux.35

The reflux can lead to permanent kidney damage and increase the risk of kidney infections. Chronic constipation is associated with an increased risk of kidney disease36 and may trigger cardiovascular events.37

Your gut and brain health are closely connected. Researchers have found that anxiety, depression and other mood disorders are related to an unbalanced microbiome.38 This link may also shed some light on why chronic constipation is associated with other neurological diseases, such as Parkinson’s.39 People with chronic constipation also have a higher likelihood of colon cancer, even when they don’t present with the symptoms.40

There are proven strategies that help normalize your bowel movements and reduce the potential you’ll develop constipation. Let’s start with your circadian rhythms, which is the focus of the Vibrant vibrating smart pill. Satchidananda Panda, Ph.D., is a leading researcher of circadian rhythm, which is the topic of his book, “Circadian Code: Lose Weight, Supercharge Your Energy and Sleep Well Every Night.”

For more information about how circadian rhythms impact your overall health, watch my interview with Panda.41,42 There are several choices we can make that have an impact on circadian rhythm. Anytime your sleep is disrupted by light, such as doing shift work, sleeping with a light in your room or having chronic sleep disruption, it impacts your melatonin production.

One of the ways that you can help reestablish a functional circadian rhythm is to pay attention to your sleep-wake cycle. It’s important to shut off all blue light in the early evening to help your body begin to produce melatonin. Get at least an hour of sunlight in the morning, which shuts off your melatonin production.

Also, practice good sleep hygiene, such as sleeping in a dark room, using your bedroom only for sleep and intimate relations with your partner and not watching television in the last two hours before going to bed.

One of the most basic recommendations is to ensure you’re drinking enough water each day. Although many people use thirst as a guide, by the time you become thirsty you’re already in the early stages of dehydration. Instead, it’s best to use the color of your urine43 as an indication of your hydration status. Aim for your urine to be a light straw color to maintain bodily functions.

Eating a high-fiber diet is another classic recommendation that helps maintain regularity and lower the risk of hemorrhoids. Ideally, you will need both soluble and insoluble fiber daily. My recommendation for daily fiber intake is 25 to 50 grams for every 1,000 calories you consume.

As you begin to add more fiber to the diet, do it gradually and be sure to drink plenty of water. Without enough water, the fiber does not pass smoothly through the system and may worsen constipation. I also strongly recommend incorporating fermented foods. These help to reseed your gut with beneficial bacteria as well as add fiber to your diet. Both will help you regain and maintain bowel regularity.

Regular exercise and movement throughout the day also support gut health. Consider these four supplements that can help maintain regularity, whether you’re struggling with constipation or diarrhea: