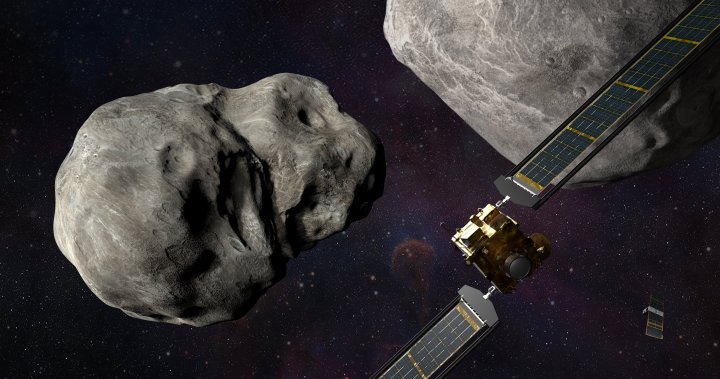 The DART lifted off from Vandenberg Space Force Base atop a SpaceX Falcon 9 rocket last November in a US$330-million project.

DART is essentially a test of the centre’s ability to defend our planet against future asteroids and other Earth-bound debris. It will deliberately slam head-on at 24,139 kilometres per hour into Dimorphos, an asteroid that measures 160 metres across.

🛰️ This is only a test – of planetary defense. Today, our #DARTMission is set to crash into a non-hazardous asteroid to test deflection technology, should we ever discover a threat.

NASA will host a livestream of the event, beginning this evening. The impact is expected to happen at 7:14 p.m. ET. A live briefing from the Johns Hopkins Applied Physics Laboratory will take place at the beginning of the livestream.

Global News will also have the livestream available, both on-site (in this article, top) and on YouTube.

“For the first time ever, we will measurably change the orbit of a celestial body in the universe,” said Robert Braun, head of the Johns Hopkins University Applied Physics Laboratory’s Space Exploration Sector.

Tonight @NASA will crash an uncrewed spacecraft into an asteroid. On purpose.

Yes, you read that correctly. And no, this is not a movie plot.

The #DARTmission is the world’s first mission to test technology for defending Earth against potential asteroid or comet hazards! pic.twitter.com/XCBtdsgVV0

It might sound like something ripped straight from the plot of a Hollywood doomsday blockbuster, and that’s exactly what scientists are trying to make sure never actually happens.

Dimorphos poses no threat to Earth, NASA makes clear, but offers scientists a way to measure the effectiveness of the collision.

“This isn’t going to destroy the asteroid. It’s just going to give it a small nudge,” said mission official Nancy Chabot of Johns Hopkins Applied Physics Laboratory, which is managing the project, during DART’s launch last year.

Though the impact should be immediately obvious — with DART’s radio signal abruptly ceasing — it will be days or even weeks to determine how much the asteroid’s path was changed.

Dimorphos is a moon that orbits an asteroid called Didymos. Dimporphos completes one orbit of Didymos every 11 hours, 55 minutes. DART’s goal is a crash that will slow Dimorphos down and cause it to fall closer toward the bigger asteroid, shaving 10 minutes off its orbit.

On July 7, 2022, the @LowellObs captured the asteroid Didymos moving across the night sky. DART is scheduled to impact Dimorphos, the moon of Didymos, on Sep 26, 2022. https://t.co/MGwrOjVs3M@JHUAPL

In the moments leading up to impact, DART will be travelling close to six kilometres per second.

DART will stream video until it is destroyed on impact. Three minutes later, a trailing craft will take images of the impact site and material that is ejected. The collision will occur approximately 11 million kilometres from Earth. The Hubble and James Webb space telescopes will also observe the event, as well as NASA’s Lucy mission.

“This test will show a spacecraft can autonomously navigate to a target asteroid and intentionally collide with it to change the asteroid’s motion in a way that can be measured using ground-based telescopes. DART will provide important data to help better prepare for an asteroid that might pose an impact hazard to Earth, should one ever be discovered,” NASA shared in a press release.

Scientists constantly search for asteroids and plot their courses to determine whether they could hit the planet.

NASA considers near-Earth objects to be any comets or asteroids that come within 48.3 million kilometres of Earth. Detecting these threats is a primary focus of space organizations around the world.

“Although there isn’t a currently known asteroid that’s on an impact course with the Earth, we do know that there is a large population of near-Earth asteroids out there,” Lindley Johnson, planetary defence officer at NASA, said last year. “The key to planetary defence is finding them well before they are an impact threat.”

NASA says no asteroids are currently on a direct impact course with Earth, but more than 27,000 near-Earth asteroids exist in all shapes and sizes.

— with files from The Associated Press