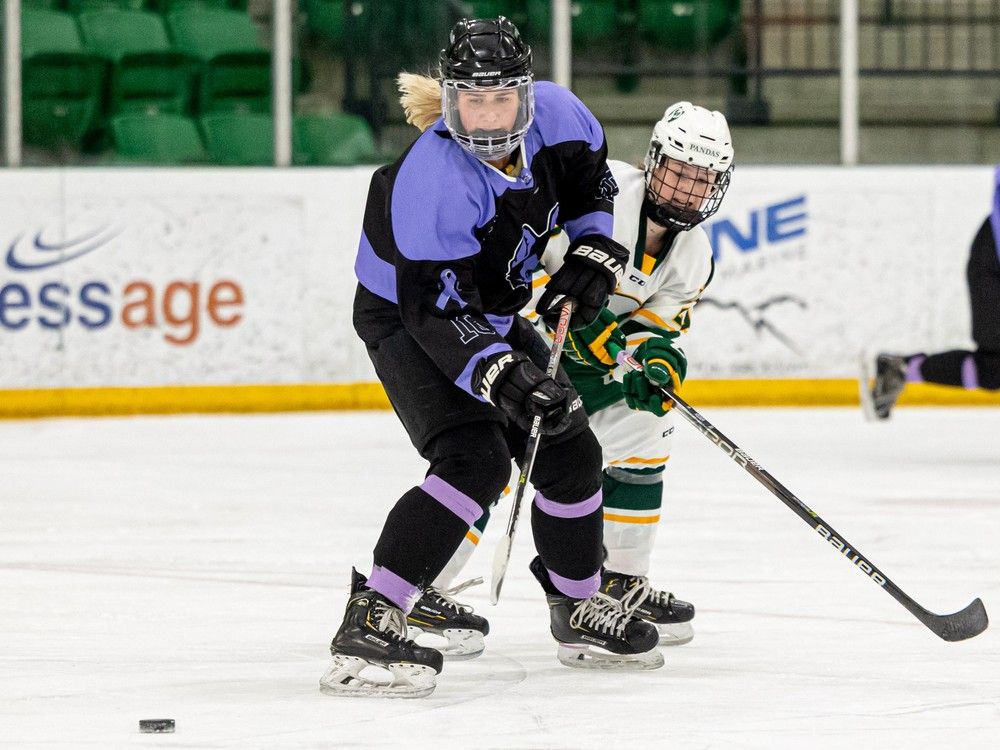 In women’s Canada West action, the Huskies (11-10-1-2) hosted the University of Alberta Pandas on back-to-back nights.

We deliver the local news you need in these turbulent times on weekdays at 3 p.m.

The next issue of Saskatoon StarPhoenix Afternoon Headlines will soon be in your inbox.

After two scoreless periods in Friday’s Play for a Cure game, Alberta’s Cassidy Maplethorpe broke the stalemate 12 minutes and 36 seconds into the third to put her team up 1-0 and give them the eventual victory.

On Saturday night, the Pandas led 2-0 after the first period and, despite a goal from Saskatchewan’s Emily Holmes early in the second period, were able to hold off the Huskies to claim a 3-1 win.

Meanwhile, in Edmonton, the Huskie men’s team (12-12-0) lost both games to the Golden Bears.

In Friday’s action, Saskatchewan was outscored 3-1 in the first period and 4-1 in the second period on route to a 7-2 loss. Justin Ball and Vince Loschiavo had the Huskies only points in the game.

The next night, Alberta scored three unanswered goals in five minutes in the second period to shut out the Dogs 3-0.

Taking on the host University of Calgary Dinos over the weekend, the Huskies women’s team (12-2) had a dominant performance on Friday night, defeating Calgary 83-57, with Maya Flindall picking up a game-high 21 points to lead Saskatchewan to victory.

The following evening, Calgary tied the game at 77 with 54 seconds left to play, but Saskatchewan’s Carly Ahlstrom scored her final two of a game-high 22 points to make the score 79-77, where it would remain until the final whistle.

Also in Calgary for a pair of games, the men’s team (3-11) narrowly lost a back-and-forth battle on Friday night 80-78. Alexander Dewar led the Huskies with 23 points.

See also  ‘It pulls us to be our very best selves’: Checking out house and variety at JPL

On Saturday, Saskatchewan trailed 53-41 at halftime and weren’t able to recover as they lost 96-85, with Maxwell Amoafo earning at team-high 20 points.

Saskatchewan’s team was in Edmonton for two days of competition at the Golden Bear Open.

The Saskatoon Blades and the Prince Albert Raiders both won in front of their hometown crowd in Western Hockey League action over the weekend.

On Friday, the Blades hosted the Raiders, scoring the first five goals of the game on route to a 6-1 victory.

The following night in Prince Albert, Saskatoon’s Brandon Lisowsky got the Blades on the board first with a goal seven minutes and 58 seconds into the opening period.

After a blank second period, the Raiders went on to score three goals in a row in the third, including two within 15 seconds of each other, to claim the eventual 3-1 win.

Saskatoon currently sits third in the WHL’s Eastern Conference with a 28-10-3-1 record and will face the No. 2 team, the Red Deer Rebels, in a road game on Jan. 27.

The news seems to be flying at us faster all the time. From COVID-19 updates to politics and crime and everything in between, it can be hard to keep up. With that in mind, the Saskatoon StarPhoenix has created an Afternoon Headlines newsletter that can be delivered daily to your inbox to help make sure you are up to date with the most vital news of the day. Click here to subscribe.