Several humpback whales found dead on B.C.’s coast in a matter of weeks 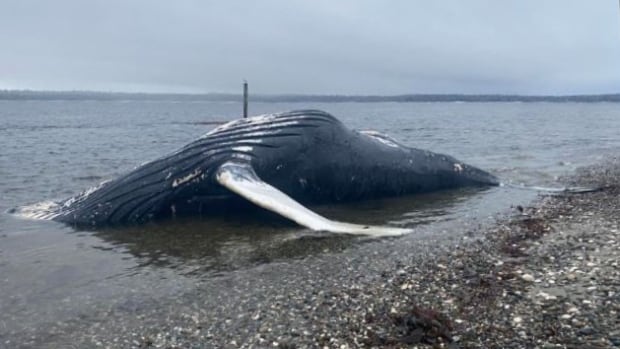 Several humpback whales have been found dead in B.C. in the span of just a few weeks, and it appears humans may be the cause in at least two of the cases.

The Department of Fisheries and Oceans has identified at least four and possibly five humpbacks found dead on B.C. beaches or coastal areas between Oct. 12 and Nov. 21.

Paul Cottrell, the marine mammal co-ordinator for the Department of Fisheries and Oceans, says at least two of them had signs of “blunt-force trauma,” indicating they may have been hit by a large object, such as a boat.

Cottrell said more research would have to be done to confirm those findings and to try and determine whether the whales were hit before or after they died, but “the indications are it was a significant impact.”

He said it would take several weeks and possibly longer before final results of the necropsies could be released.

Jackie Hildering, education director with the Marine Education and Research Society, says it is unusual for researchers to have access to the bodies of dead humpbacks, as they usually fall to the bottom of the ocean.

She said learning about the cause of death in these cases would provide valuable insight and a learning opportunity on how to help protect the animals.

Humpbacks were considered a “threatened” species in B.C. until 2014 when efforts to restore their numbers resulted in success. The North Pacific population is still considered “of special concern” under the federal Species At Risk Act, as their numbers are recovering but not yet stable.

The first dead humpback was spotted Oct. 12 and Oct. 15 floating in water near Prince Rupert on B.C.’s North Coast. However, researchers were not able to secure the body for a necropsy, but they believe they may have discovered it decomposing on a beach in Haida Gwaii on Nov. 21.

The second was found on the north side of Malcolm Island near Port McNeil in southwest B.C. on Oct. 23. The young female, known to researchers as Spike, showed signs of blunt-force trauma.

That was followed on Nov. 5 with the discovery of a dead male near the community of Massett on Haida Gwaii and another male in Naikoon Provincial Park on Haida Gwaii on Nov. 14.

Hildering says researchers were able to compare the markings of the third and fourth whales with photographs of the first to determine they were not the same animal.

During that time, another humpback was found entangled in fishing gear in Quatsino Sound near Vancouver Island. That whale survived.

Hildering said marine traffic poses a risk to humpbacks, who often sleep or nurse their young right below the surface of the water.

She also said because most whales sink, it can be tough to know when they are killed in a collision.

“How many whales are dead at the bottom of the ocean? We don’t know,” she said.

She said part of her organization’s mission is to teach boaters how to avoid collisions with marine mammals and what to do if one occurs and that most people in B.C. don’t know they have a legal responsibility to report whale strikes and entanglements to the DFO Incident Reporting Line at 1-800-465-4336.

Hilderning is hopeful that by sharing the stories of the recent deaths — and allowing people to see the bodies — more members of the public will become aware of the need to protect the species as threats to them increase due to increased marine traffic and climate change.

Experts talk to residents in Niagara, Ont., to appear for meteor pieces after weekend fireball